I am really struggling with what to write about this week. Truth be told, I am in the midst of the worst depression I’ve experienced in 14 years. It’s really bad, you guys. I don’t even have words to talk about it. And current political actions aren’t doing anything to decrease my feelings of dread and anxiety. But know that I am taking care of myself and seeing my doctor(s) and all that good stuff.

It’s just that my mind is mostly sludge at the moment. But I’m determined not to lose track of this Blog Regularly Thing four months into it. Or shit, 5 months. It’s May, y’all. We’re already one week into May, in fact. Good grief.

Anyway, I’ve decided to write about my Book Club. It was about a year ago that a “friend-quaintance” (I’m making up that word because there should be a word for a relationship level that is between friend and acquaintance.) told me about a book club some of her friends were starting and she Facebook-introduced me to the woman who was running the group. I immediately started following along with the reading, but it took me about four or five months to get the courage to go to a meeting. I was nervous about meeting a bunch of new people, even though I knew we all loved books, which is always a good friendship precursor for me. But still, meeting people and making new friends is harder in your 30s. Anyway, the book we discussed that first month I attended was The Girl with All the Gifts.

I loved the book, and it was totally not a genre that I typically enjoy. I had no idea what it was about when I started reading it. I just downloaded the audio book and dove right in. It was great narration, which I think kept me engaged past the parts that aren’t really my scene. I don’t want to say anything else about it because I don’t want to ruin it for you! But you should read it if you like interesting fiction and good characters. The characters are so fantastic that it carries you through a few tedious plot points.

We read Paper Towns by John Green and I did not enjoy it nearly as much as I wanted to. I want to like John Green but there’s something off-putting to me about his writing. Yes, even in The Fault in Our Stars annoyed me. (Although I still cried like a baby; I do have a heart.) Maybe I’m just too old. I also didn’t like The First Bad Man by Miranda July. Such a strange bummer of a book. But I loved Nimona, a fantastic graphic novel. 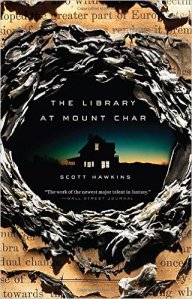 My favorite book so far that we have read is The Library at Mount Char. It was creepy and weird and gory and so fantastic. Again, not a book I would have chosen on my own, but it was so awesome. You need to read it. It was one of those books that I wanted to reread immediately after I finished it. And I did start it again, but then I got distracted by other books. There are always other books.

This month, we read The Invisible Library. I wanted to like it so badly, but the writing was just. not. great. The idea was fantastic and so interesting — a secret Library that can cross worlds, looking for original fiction to take back and study? A magical Language that can control elements and manipulate worlds? Sign me up! But the writing didn’t come together.

As far as the Book Club itself, well, I like the women in the group. There’s a core group of three women who are always there and the rest of us rotate in and out. They’re sharp, witty, and love books and movies so there’s always plenty to talk about. And I love being a mom, but it’s nice to go hang out with people where I’m not in mom-mode. I rarely even talk about the mom side of my life. Which feels weird sometimes, but I’m the only one with kids and I don’t want to be that mom who won’t shut up about her kid. Plus, it’s kind of nice to shut up about my kid once a month. That sounds worse than I mean it to —  I’m just saying it’s nice to go somewhere and talk about books and movies and play fuck, marry, kill and talk about dogs and cats and feminism and politics and more books. It’s been good for me to get that specific kind of recharge time every once in a while.

My being in a book club inspired Adam to join one too so he’s been going to the monthly meeting at Brazos Bookstore. He’s enjoying the time as well. And this means we both get a one-on-one evening with Fig each month, and I think that’s good for all of us as well.