I’ve hesitated writing about this topic for a while, but it just keeps knocking on my heart and mind. It won’t go away so I’m going to have to address it. Let’s get right to it.

I have bipolar disorder, with a severe anxiety component. (I’ve never actually asked if I have a second diagnosis of an anxiety disorder, but I know my meds help with anxiety too.) I have been on (and off but mostly on) medication since I was 15. I’ve tried and failed with most new generation antidepressants and mood stabilizers that were on the market as of 2003. That year, I was part of a clinical trial where I got a vagus nerve stimulator implanted. It’s like a pacemaker just under the skin in the left side of my chest with a little wire that runs up to the vagus nerve in my neck. An electrical impulse stimulates the nerve for 30 seconds every 5 minutes. It makes my voice go creaky sometimes and it makes me burp a lot. (The doctors say that’s not a real side effect, but I have been a major burp machine since 2003. You do the math.) Somehow, the battery is still good, nearly 14 years later. It was only supposed to last 5-8 years, but I guess mine is turned down so low it just keeps on ticking – or zapping, as it were. I’ve been mostly stable since I got the VNS and, even when depressed, I haven’t been actively suicidal since starting it. It was my miracle. The journey to the VNS was a long one, and I don’t take the stability I’ve experienced for most of the past 14 years for granted. Especially after my postpartum depression.

I don’t talk about having bipolar disorder, or at least I didn’t until now. I used to, but I found that people have certain expectations of you, as if any extreme emotion is a symptom of my illness flaring up. If I’m crying, if I’m mad, even if I seem a little too happy or excited about something – “Did you take your meds today?” Just a tip, it’s never ok to ask someone that unless they’ve specifically given you permission to check on them. Even then, there are better ways to frame your concern. It’s a real asshole of a question is what I’m saying. I found that people treated me differently as a friend, as a coworker, as an employee once they knew I had this mental illness, even (or maybe especially) in the mental health field, where they should know better. And with the way bipolar disorder is portrayed in movies and pop culture, it gives people an expectation about you, and they will twist you into shapes until you fit that mold.

I don’t fit the mold. Mainly because there is no mold. There are common symptoms, but no one experiences those symptoms the same way. Treatment is incredibly individualized, and recovery looks different for each person. I have Type II bipolar, so the manias are less severe, but my depressions are as bad as they come, and I tend to be treatment resistant, and my moods rapid cycle, which means instead of a mood lasting for weeks, my mood can switch after days or even hours. It’s a real fun ride, let me tell you.

Why am I writing about this now? Well, I’m not 100% sure, honestly. Partly because I’ve talked about my postpartum depression on here, but to leave it at that is to leave my story incomplete. And I want to become a better advocate for people who are living with mental illnesses. I want my daughter to know that I’m not ashamed of this part of me (in progress), and she should never, ever be ashamed of addressing her mental health and wellness. I want all the mood-fluctuating bullshit to be worth something and I think the only way that can happen is to share my stories, to make other people feel less alone, to help someone find that “OMG, me too!” moment.

My bipolar disorder doesn’t define me, but it is one of the things that shapes who I am, along with my spirituality, my family, my friends, my choices. It’s something I didn’t get to choose, something I never would have chosen. It’s both incredibly significant in my life and also just this thing I deal with sometimes.

With this post, I’m freeing myself up to be able to talk about how my moods affect me, how they affect my project, and what I’m doing for my recovery. There have been several posts where I’ve wanted to say, I tried this Thing, but it just didn’t happen because I was depressed and wanted to hide under a blanket on the couch instead of learning to crochet, or whatever. Now I can do that and it fits into the context of my story.

The whole goal of the Things is to live into who I am and be courageous. I can’t think of anything more courageous than talking about this. Except maybe making the bed every day for 30 days. 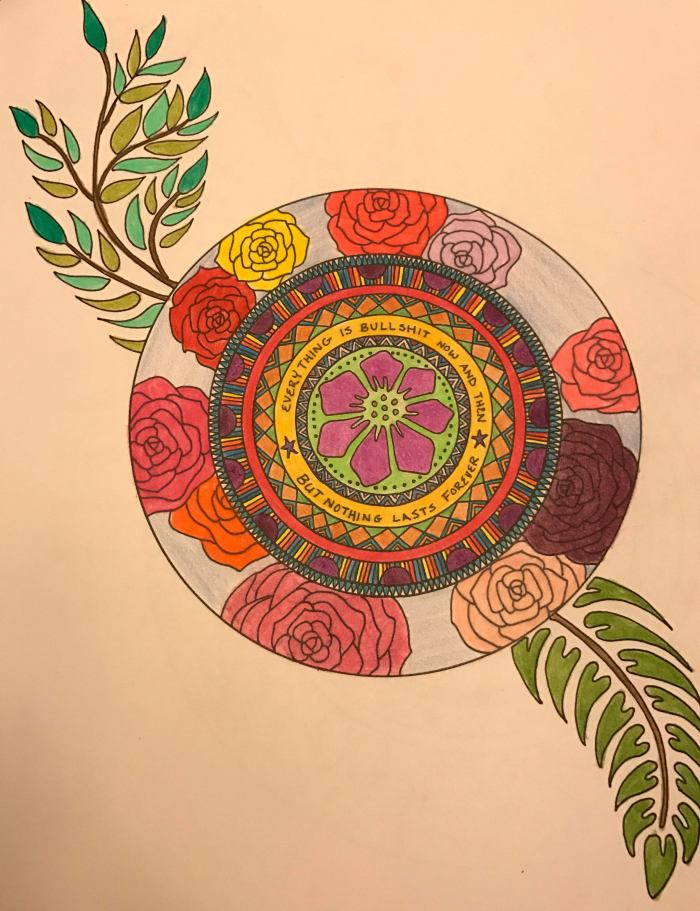 Thanks to The Bloggess for her awesome new book, You Are Here, where I found this coloring page with a perfect reminder in the face of hard times.

4 thoughts on “Something about me”